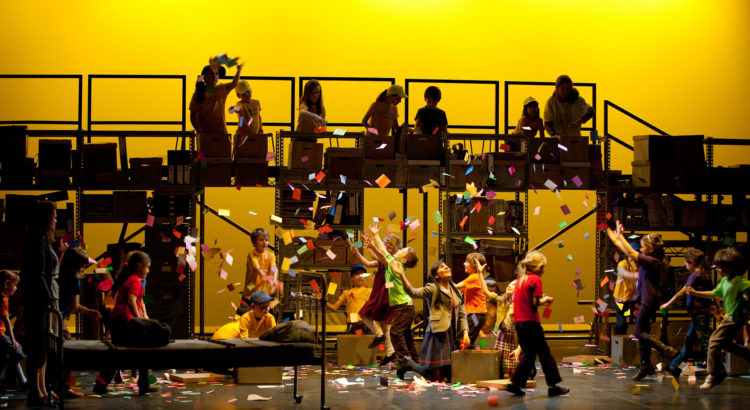 In his historical note written for FCMG’s 21st Birthday Concert in 1980, John Andrewes (who founded the choir in 1958) described the policy of the group: “During these first formative years some kind of artistic policy began to evolve… Since in these early days good music written for children was very thin on the ground, it became apparent that the FCMG would have to engage in commissioning new works as a matter of policy”

FCMG’s first commission was Julius Caesar Jones with music by Malcolm Williamson and a libretto by Geoffrey Dunne, which had a two week run at the Jeanetta Cochrane theatre in 1966. It was recorded by Argo later that year. FCMG staged Julius Caesar Jones again at Sadler’s Wells in 1994 to celebrate its 35th anniversary. Potter Thompson with music by Gordon Crosse and a libretto by Alan Garner was commissioned a decade later and in addition to the performances, including two at that summer’s Aldeburgh Festival, it was televised by the BBC.

Continuing this trailblazing tradition, for the 60th anniversary in 2019 FCMG commissioned two new works: Winter Songs by Joanna Forbes L’Estrange & Alexander L’Estrange – a set of songs on the theme of winter; and Under the Giant Fern of Night with music by Alastair Putt and text by Rebecca Elson – three poems by Rebecca Elson’s and an extract from her journal, combined and resulting in four songs. We premiered these two works at the Queen Elizabeth Hall in 2019 as part of our 60th Anniversary celebrations.

Ten years earlier, Finchley Children’s Music Group celebrated our 50th anniversary with the ambitious commissioning of a new opera, The Jailer’s Tale, with music by our patron Malcolm Singer and a libretto by Nick Toczek. The Jailer’s Tale was performed at the Arts Depot, Finchley and the Royal Festival Hall in 2010.

The group has aimed to commission larger scale works, including cantatas and song cycles rather than individual songs, on a regular basis. These have included:

Songs of War and Peace by Geoffrey Hanson 2003

Songs of Experience by Brian Chapple 1998

The Elements by Roddy Skeaping 1996

Songs of Innocence by Brian Chapple 1994

Songs from Alice by Brian Chapple 1984

The Little Orientals by Richard Blackford 1981

The Jackdaw of Rheims by Richard Roderick Jones 1978

The Fly by Nights by Elizabeth Maconchy 1974

The History of the Flood by Gordon Crosse 1970