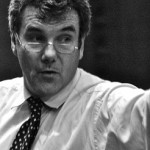 His musical education began as a Quirister at Pilgrims’ School, Winchester and continued as a music scholar at Cranleigh School. While reading English at Christ Church, Oxford, Nicholas founded and conducted the Oxford Philharmonia. He subsequently spent three years studying conducting and clarinet at the Royal Academy of Music, London, where he was supported by generous funding from the Drapers’ Company. After leaving the Academy, he specialised in working with young musicians as Musical Director of the Finchley Children’s Music Group, conducting youth orchestras in London and the Channel Islands, and as Musical Director of New Youth Opera.

He has conducted in Europe, South Africa (leading the first tour by a British youth orchestra since the fall of apartheid) and Chile, and has broadcast on BBC2, 3 and 4, Classic FM and the BBC World Service. Nicholas’s choral repertoire is extensive, with recent performances including Mendelssohn’s Elijah with Bryn Terfel, Walton’s Belshazzar’s Feast, Britten’s St Nicolas, Elgar’s The Apostles, Dvořák’s Stabat Mater, Haydn’sNelson Mass, The Seasons and The Creation, Handel’s Messiah with Emma Kirkby and Peter Harvey, the Brahms German Requiem with Dame Kiri Te Kanawa in Winchester Cathedral, and the requiems of Mozart, Verdi, Fauré, and Duruflé. Nicholas has also conducted concertos with Alison Balsom, Lionel Handy, Adrian Adlam, Julian Poore and Roger Owens.

His opera credits include Eugene Onegin, Noye’s Fludde, Der Freischütz, La Belle Hélène and The Bartered Bride. Nicholas conducted the premiere of Alec Roth’s Earth and Sky at the BBC Proms in 2000 with Joanna MacGregor and Ensemble Bash, and was elected an Associate of the Royal Academy of Music for professional distinction in 2001. His recordings include Britten’s Noye’s Fludde and A Ceremony of Carols (a Sunday Telegraph Critic’s Choice), and a Naxos recording of music by Charles Davidson as part of the Milken Archive series of American Jewish music.