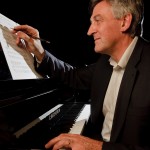 Malcolm Singer is Director of Music at the Yehudi Menuhin School, and a professor of Composition at the Guildhall School of Music and Drama in London. He read music at Magdalene College, Cambridge before studying in Europe with both Nadia Boulanger and Gyorgy Ligeti. He was later awarded a Harkness Fellowship, spending two years at Stanford University, California. In 1995, a “portrait” concert of his music was given in Cologne, and in 2003 there was a 50th Birthday Concert of his music given in St. John’s, Smith Square, London.

Malcolm has worked with young musicians throughout his professional life, and has composed much music either for young performers, or for a mixture of young musicians and professionals. While Making Music (1983) was written for the children’s audience of the Robert Mayer Concerts (but performed by the BBC Symphony Orchestra), H.D.’s Song (1991) is for children’s choir and children’s instrumental ensemble. A Hopeful Place (1996) was commissioned for Lord Menuhin to conduct at his 80th birthday concert in the Royal Albert Hall; it is scored for children’s choir (with soloists), string octet and symphony orchestra. Malcolm has composed several works for beginner violinists to perform alongside professional musicians. Fantasia on Yehudi’s Theme (1998), written especially for the ‘Menuhin’s Children’ project was followed by Rondoletto (2003). More recently he wrote Suite: from the Shtetl (2007), which has had many performances all over the country.

Malcolm Singer first worked with the poet Nick Toczek on Dragons (1997), a cantata commissioned by Surrey County Arts for children’s choir and youth orchestra. Encouraged by the success of this work, which was published internationally by Music Sales and performed all over the country, they collaborated on a football cantata – Perfect Pitch (2004). The Jailer’s Tale (2009), commissioned by FCMG, was their first opera.

Malcolm is also much in demand as a conductor. He was Musical Director of the Zemel Choir for ten years, and regularly conducts the Menuhin School Orchestra both here and abroad. He has worked with both the BBC Symphony Orchestra and the BBC Singers, and recently conducted the New Haifa Symphony Orchestra in a concert including his own cantata The Mask of Esther.