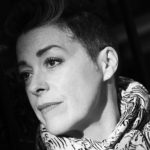 Rebecca is a graduate of the Royal Academy of Music, where she studied singing and piano. During her time at the RAM, she received many prizes, including the Lloyds Bank Scholarship for postgraduate study, which enabled her to complete her studies on the Opera Course. Her career over the last 25 years has seen her perform in many different venues and styles. She has also performed as a soloist several times for the BBC Symphony Orchestra, most recently the role of Anaide in Opera Rara’s production of Leoncavello’s ‘Zaza’ at the Barbican.

As a former member of the BBC Singers, the United Kingdom’s only full- time, professional chamber choir, she broadcast extensively on BBC Radio 3 and BBC television. Her many solos for the group included Strauss’s Deutsche Motette, the Rachmaninov Vespers, the Durufle Requiem (all broadcast live on R3) and Scarlatti’s Stabat Mater at the Proms. Recordings include settings by Peter Child of Rilke’s poetry in collaboration with the ensemble Lontano, and a newly discovered mass by Vaughan Williams. Rebecca is now a permanent member of the Royal Opera House Chorus.

Rebecca has a great passion for music education and has been conducting the FCMG Intermediate Choir since 2015.