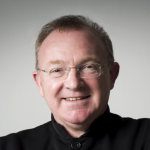 Martyn Brabbins graciously agreed to become the President of FCMG in October 2015.

Martyn Brabbins is Music Director of the English National Opera. An inspirational force in British music, Brabbins has had a busy opera career since his early days at the Kirov and more recently at La Scala, the Bayerische Staatsoper, and regularly in Lyon, Amsterdam, Frankfurt and Antwerp. He is a popular figure at the BBC Proms and with most of the leading British orchestras, and regularly visits top international orchestras such as the Royal Concertgebouw Orchestra, Deutsche Symphonie-Orchester Berlin and Tokyo Metropolitan Symphony. Known for his advocacy of British composers, he has also conducted hundreds of world premieres across the globe. He has recorded over 120 CDs to date, including prize-winning discs of operas by Korngold, Harrison Birtwistle and Harvey. He was Associate Principal Conductor of the BBC Scottish Symphony Orchestra 1994–2005, Principal Guest Conductor of the Royal Flemish Philharmonic 2009–2015, Chief Conductor of the Nagoya Philharmonic 2012–2016, and Artistic Director of the Cheltenham International Festival of Music 2005–2007. He is currently Visiting Professor at the Royal College of Music and Music Director to the Huddersfield Choral Society alongside his duties at ENO, and has for many years supported professional, student and amateur music-making at the highest level in the UK.

In June 2019 Brabbins made his San Francisco Symphony debut conducting RavelL’enfant et les sortilèges, appearing two weeks later at the Grant Park Festival in Chicago. Then in August, to mark his 60th birthday the BBC Proms commissioned a set of variations by 14 living composers, mirroring Elgar Enigma Variations (also in the programme). Brabbins was joined by the BBC Scottish Symphony, English National Opera Chorus and BBC Singers for the televised concert which also included Vaughan Williams’ Serenade to Music.

To open the 19/20 season Brabbins conducts a new production of Harrison BirtwistleMask of Orpheus at English National Opera – the first London staging since its debut 30 years ago, also at ENO; with Puccini Madame Butterfly later in the season. In May 2020 he conducts the world premiere of Thierry Escaich Khosrow et Chirine at the Opera National de Lyon. Symphonic highlights include the continuation of his acclaimed Vaughan Williams cycle with the BBC Symphony at the Barbican; a Shostakovich/Mussorgsky programme with the Royal Philharmonic in their London season; the European premiere of his BBC Proms Enigma commission with the Antwerp Symphony, where he has a long association; and his return to Suntory Hall with the Tokyo Symphony to give the Japan premiere of James Macmillan Trombone Concerto.

Brabbins’ extensive discography ranges from Romantic to contemporary repertoire, with over 50 recordings for Hyperion Records alone, notably of Elgar, Walton and Tippett. He won the Gramophone Award for Birtwistle Mask of Orpheus with the BBC Symphony (NMC), the Cannes Opera Award for Korngold Die Kathrin with the BBC Concert Orchestra (CPO), and the Grand Prix du Disque for his recording of Jonathan Harvey Wagner Dream.