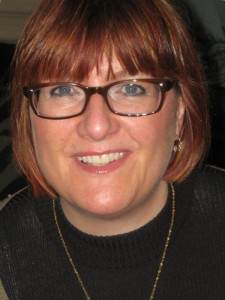 Janie’s association with FCMG goes back to 1997, when her son James joined as a Beginner at the age of five, her daughter Millie joined when she was four in 2000. Some six years later, Janie had the great honour and privilege of becoming the Director of the Beginner’s Choir. An honour and a privilege, because it is just that, introducing children to the joy of choral singing and watching them embark on a journey that will continue to give them and others joy for the rest of their lives.

Janie began teaching music to children in 1995, and has worked extensively with very young children, although she also teaches individual pupils through to sixth form and beyond. Together with her husband Raymond they run their local church choir at Our Lady of Muswell (est. 1997) and have an adult choir based in Barnet called Vivace Voce (est. 2000). In 2002, they also established a very successful holiday club for primary age children called Musicart. Janie also writes musical plays, does occasional composition work and arranges choral music specifically for her schools and choirs.

Janie’s own musical interests are broad, she loves classical church music and sang from that repertoire for many years in church choirs. She was also a member of the Gospel Choir ‘100 Voices’, for several years, which included members of the London Community Gospel Choir. She also had great fun with a rock band, doing a lot of charity gigs! Janie has also done Cabaret singing in the Southwark Playhouse and other London fringe theatres and private parties. But if one genre had to picked as a favourite, it would be Musical Theatre.

Janie is passionate about performing and wants to pass on this enthusiasm to everyone she works with: doing something well can lift your spirits and transport you to a different place. Janie has seen, through her own children, the tremendous benefits being part of a choir like FCMG can give a child. They learn how to sing and read music, but they also learn about commitment and responsibility, they mix with children from all over London and from all different sorts of schools. All of these ‘hidden’ features are not necessarily what parents consider when they sign up, but that is what makes a choir like FCMG unique: a cohort of children bonded together through music from the age of four to eighteen, their shared experiences and friendships becoming unbreakable. Janie looks forward to welcoming and working with the children who will be the future of FCMG.

Congratulations on our singers for the concert, the show and for just being all kinds of fabulous. From the shimmering Brahms to the professional (and not so professional 😂) Charlestons, puppetry and brilliant soloists, Summer School was well and truly back. 👏🎉

All too soon the end of the week is upon us - BBQ and straight into dress rehearsal. Good luck for tomorrow everyone.🤞

A very happy birthday to our wonderful accompanist #johnevanson #bearded - a most unusual choice of cake! 😉🎂

Bright and early warmup today. A shock to the system for some of them! 😄👏

This is more like it - evening sun, football, letting off steam after singing all day. Must be Summer School again 🎉🎶🙂